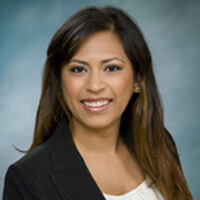 Jenkins Obstetrics, Gynecology & Reproductive Medicine is pleased to welcome Yara Ramirez, MD to our Katy and Houston, TX offices. We are delighted to have Dr. Ramirez join our clinic to provide our patients with great, expert services. She also knows Spanish and French, helping us to communicate more effectively with individuals who speak little English.

Dr. Ramirez volunteers extensively in the community in addition to spending time at our office. She has volunteered in the Hospital Militar in Quito, Ecuador, and the Karoli Lwanga Hospital Nyakibale in Rukungiri, Uganda, as well as aided and observed private physicians at military hospitals and practicing physicians in rural hospitals.

She received the Resident Teaching Award from the Department of Obstetrics and Gynecology at the University of Texas Medical Branch in Galveston, Texas, for two years in a row, in 2015 and 2016.

Dr. Ramirez has researched on a variety of topics, including Causes of Intrauterine Fetal Death in Sub-Saharan Africa, Outpatient Opioid Use after Multimodal Pain Management for Cesarean Delivery & Risk Factors for Surgical Site Infections after Cesarean Delivery, and Medications and their Effects on Breastfeeding.

Dr. Ramirez has been a Junior Fellow Representative for the UTMB Residency Program, December 2016-2019, and a Medical Student Education Committee Member, February – September 2017 at the American College of Obstetrics and Gynecology.